As spring quarter has picked up, we’ve been keeping ourselves busy with exciting new projects! We started off on April 12th with a class in the art of fruit tarts, courtesy of Whole Foods and Chef Ramos from Michelin-starred restaurant Everest. Although Chef Ramos didn’t look much older than the students who attended, she knew exactly what she was doing; she expertly rolled out a soft, buttery dough and cooked up a batch of luscious vanilla-bean-flecked pastry cream, all while giving valuable advice on how to make the best tart.

We also got to create our own fruit tarts as part of the class! Everyone used a personal piping bag of pastry cream to fill the shells and then topped the tarts off with a variety of fresh fruit. 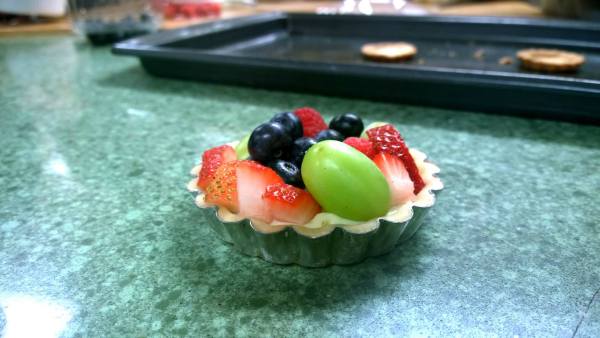 The tarts were absolutely delicious. Tender but slightly crumbly shell, smooth vanilla pastry cream, and sweet yet tart fruit—you can’t really go wrong with any of that. (Also, there was so much pastry cream left over that some of us started to eat it by itself. It was that good.)

Later that week, on April 16th, we started up our Food Lab series with a bang: recreating a signature dish from one of the best restaurants—and chefs—in the world. Our dish of choice that night was Chef Thomas Keller’s “Oysters and Pearls,” served at The French Laundry in California.

We broke off into groups and split up different components of the dish: tapioca pudding (with hot sabayon and crème fraîche stirred in); fresh oyster; a sauce of butter, Vermouth, shallots, and white wine vinegar; and a quenelle of one of the most expensive ingredients in food, caviar.  When we put the components together, the dish looked unassuming, a kind of pale yellow porridge strewn with bits of shallot, chives, a lump of oyster, and a small shock of black caviar. In fact, it even looked a little gross… but a spoonful of it soon had us forgetting its modest appearance.

It was soft, silky, buttery, creamy…luxury, pretty much. (And that’s not even because of the price tag on the caviar.) The briny notes of caviar and oyster added some much-needed edge and complexity to the tapioca.

Everyone scraped the first bowl clean, although we found that after 2-3 spoonfuls, the dish was too rich for us to continue eating. As we discussed, we discovered that our serving size was huge compared to the amount served at The French Laundry, which was actually about two spoonfuls—just right! Even so, we were just glad to have our own chance to bring a little of that fine dining spirit to campus. For many of us, “Oysters and Pearls” was our first taste of caviar, so it was exciting to make that—and a taste of The French Laundry—available to Cookology students. 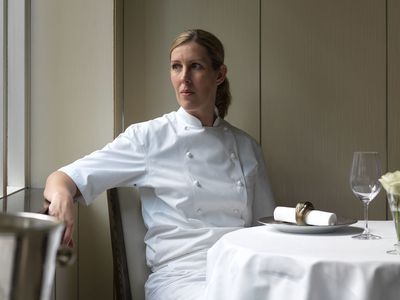